Much like any other year, 1996 had its ups and downs, its peaks and troughs.

It started cold, very cold. Take That then announced that they were splitting up, Germany won the European Championships, Dolly the sheep was born and the Spice Girls released ‘Wannabe’. Ups and downs, peaks and troughs. 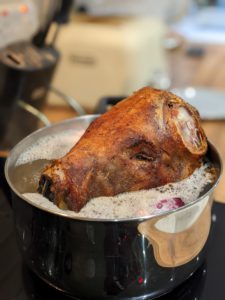 And so it was one warm evening in early October that I found myself standing outside a delicatessen in the mountain town of Corté buying bits and pieces for that evening’s repast. This was window shopping, for the most part, le vin rouge having previously been purloined and so all that was required was some cheese and maybe some bread.

“What’s that?” I asked my friend and staunch Corsican, Jean-Charles, as I indicated a large square of ominous looking, chunky pâté.

“It’s called, fromage de tête,” he replied. “But you don’t want to know what’s in it, otherwise you won’t eat it.”

Pulling myself up to my full height (5 feet, five and three-quarter inches,) I fixed Jean-Charles with a haughty stare. “Do you know to whom you are speaking, monsieur? I have eaten Spam, sir! Spam! And Pot Noodles! Neither am I a stranger to Fray Bentos pies. No, monsieur, I must insist that we purchase some of this ‘head cheese’ post-haste and devour it at length.”

As you may or may not be guessing, le fromage de tête is a course terrine, the equivalent for the English speaking world would be pig’s head brawn or for the Teutons among us, die Sülze.

Amazingly, although I recall word for word the exchange of that evening’s deliberations outside the delicatessen on one of Corté’s cobbled streets, I cannot for the life of me remember what le fromage de tête tasted like. This could be due to the after-affects of le vin rouge or perhaps because the night is more than 20 years behind me. Whatever the case, I had reason to recall my first encounter with la tête du porc, when I was reached an Irish version last weekend.

Coincidentally, it was during a celebration in my local pub (Tom’s – possibly the greatest public house ever to exist) to welcome a contingent of French visitors to the locality that I was gifted the gift. Earlier in the day there had been a celebratory pig-on-a-spit and in the aftermath, one of the local n’er-do-wells landed at the bar with la tête.

Full of bravado (and vin rouge), I immediately insisted that I should be the one to take the head home and devour it at length, my vin-addled mind no doubt conjuring up images of Cuban cabanos or tender pig’s cheeks or some other porcine delicacies.

On the morn however and with the cold light of day battering at my eyelids with all the subtlety of a crowbar, the sudden realisation of having a pig’s head in your utility room is rather a sobering thought.

“Awww, jaysus,” I might have said and then, “no more vin rouge for me.”

Further thoughts included, “maybe I’ll just bin the thing and tell everyone Herself threw it out,” and, “sweet Fintona, but I’m wile thirsty.”

In the end though, as you can see from one of the photos, the pig’s head didn’t find its way into the bin but rather, snuck its way into the biggest pot in the house. I may or may not have needed a sharpener ahead of dealing what was effectively a barbecued animal’s head.

“Drink a Henry Weston in two gulps and you will be able to deal with anything,” the same n’er-do-well sagely advised via text. “Maybe make a necklace out of the teeth.”

Whilst I wouldn’t count myself as being squeamish, I’m not entirely bereft of sensibilities and so I found the whole ‘dealing’ process to be more manageable when I didn’t look the pig in the eye. I mean, it had eyelashes for Fanta’s sake!

Anyway, swallowing down my sensibilities and manning up as best I could, I added some vegetables and herbs to the pig’s frothy bath (celery, carrot, onion, garlic, rosemary and thyme) as well as a couple of peppercorns and a bay leaf for good measure. It then bubbled away for about two hours and I turned it half way (so that it wasn’t looking at me any more).

Surprisingly (for me at least) the pig’s head turned out the most fantastical tender cheek meat and via a second sharpener, I scoffed a hearty amount via a grinding of salt and some oohs and ahhs. The resulting stock however was so powerful as to be bordering on potent. This I honestly couldn’t handle on the same evening as dealing with the head and so it was consigned to a tub and slotted in at the back of the fridge.

Come Wednesday evening I reckoned that if I didn’t deal with the stock de tête, it wouldn’t get done and so with renewed steely reserve, I cracked open the tub and set to work.

The result, as far as my tastebuds can tell, was a Mexican pig’s head soup. I added chillis, Worcestershire, garlic, smoked paprika, cumin, chipotle, leeks, tomatoes, carrots and a dash of sriracha for the madness. I’m not going to give you the full recipe with the thinking that you probably don’t have a barbecued pig’s head in your utility room – more’s the pity.

However, I can attest to the fact that if there’s another pig’s head going begging any time soon at Tom’s, I’ll be elbowing my way to the front of the queue.

How did it taste? In a word, magnificent. It was the ultimate in bone broth and the flavour had such a legion of layers of depth as to be an escalator to culinary heaven. Think Mexican pulled pork but in a soup.

And as you can see from the other photo, it looked the part too.

Another certified peak in my world.

‘On the morn however and with the cold light of day battering at my eyelids with all the subtlety of a crowbar, the sudden realisation of having a pig’s head in your utility room is rather a sobering thought’ The flavour of life – Taste Scene Welcome to the toastswitch – Taste Scene